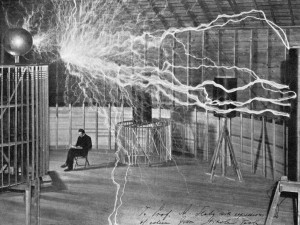 This work was inspired by the life of a great man.

Born in modern-day Croatia on July 10, 1856, legend has it that he came into this world appropriately during an intense thunder and lightning storm. As the story goes, he immigrated to America in 1884 with only four pennies to his name. He was a remarkable mechanical inventor and electrical engineer with unparalleled vision and an eidetic memory. His life’s work would usher in the modern age of technology. Some of this futurist’s accomplishments include inventing polyphase AC current, the modern induction engine, wireless technology and communication, radar, X-ray technology, and key patents leading to radio. Financial gain was not a priority, nor was business acumen a strength, instead he genuinely wanted to improve the lives of all people. His financial backing was pulled once it was learned he intended to provide free global wireless electricity. Obsessed with the number three, he lived out his final years in room 3327 on the 33rd floor of the New Yorker Hotel. Nikola Tesla passed away alone there on January 7, 1943. Family lore has it, 86 years earlier there was a thunderclap that prompted the midwife to fearfully proclaim “He’ll be a child of the storm” to which his mother replied “No, of light.”