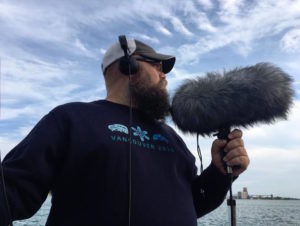 Field recording on the Detroit River (2017)

He received a BFA from Simon Fraser University, where he studied with Barry Truax and won a Jeu de Temps/Times Play national prize for his composition Ritual. He would also contribute to the World Soundscape Project by digitally archiving the original master tapes for the entire European and Canadian collections.

After years of touring and recording with the rock band Crop Circle, Brian studied in Vancouver with Rodney Sharman, Hildegard Westerkamp, and completed his Master of Music degree at UBC, where his teachers included Bob Pritchard and Keith Hamel. He recently completed his PhD at the University of Calgary under the supervision of Laurie Radford where he also studied with Allan Bell.

He has presented research in Canada, England, Japan, and Korea and has published in the proceedings of the Electroacoustic Music Studies Network (EMS), the International Computer Music Conference (ICMC), and in eContact! (Canadian Electroacoustic Community). He has enjoyed two residencies at the Banff Centre and was twice a participant at the Darmstädter Ferienkurse. He spent an extended research residency in the United Kingdom, where he worked with Joseph Hyde, P. A. Tremblay, and Trevor Wishart.

Garbet’s music has been performed by François Houle, Quatuor Bozzini, Standing Wave, the Victoria Symphony, and Turning Point Ensemble; he has been commissioned by the Strata Festival, Land’s End Ensemble, the Chan Centre for the Performing Arts, and poet Christine Hume. His music regularly receives airplay and performances across Canada as well as Austria, China, Finland, Germany, New Zealand, and the United States.